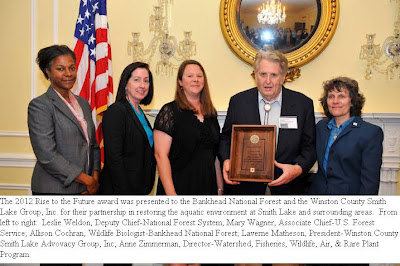 News Release - (Double Springs, Ala.) April 18, 2012 --- The U.S. Forest Service’s Bankhead Ranger District and longtime partner, Winston County Smith Lake Advocacy Group, were recently honored at a national ceremony in Washington, D.C. for their dedication to ensure the water quality of Lewis Smith Lake is protected and preserved. Numerous volunteers and Forest Service employees earned the Rise to the Future award – the Forest Service highest honor for exemplary aquatic stewardship.
Since 2007, the Winston County Smith Lake Advocacy Group has collaborated with the Bankhead National Forest in sponsoring lake shore clean-up events as part of the Alabama Power Company’s ‘Renew Our Rivers’ campaign. According to Elrand Denson, Bankhead district ranger, the Winston County ‘Renew Our Rivers’ clean-up events have removed approximately 180 tons of litter including styrofoam, appliances, tires, boating accessories and fishing tackle from Lewis Smith Lake shorelines in Winston County and the Bankhead National Forest.
“The coalition of partners have worked together tirelessly to remove trash from the shorelines on over 166 river miles in Winston County. The Forest Service commends our partners for taking on a community project to improve Alabama’s abundant natural resources” said Allison Cochran, Bankhead National Forest’s wildlife biologist. Such removal of litter not only beautifies the lake, but also prevents harm to wildlife animals and plants. It helps decontaminate the waterways and assists in preventing bushfires that damage natural areas.
“The partnership with the Bankhead Ranger District is allowing us to clean up the lake for future generations to enjoy,” said LaVerne Matheson, President of the Winston County Smith Lake Advocacy. “Now we have a beautiful lake with water so blue it sparkles like diamonds at times.”
Originally, the partnership began as a small community cleanup that has now evolved into a large-scale grassroots project with hundreds of volunteers and supporters, including the Winston County Commission, Alabama Conservation Enforcement Officers Association, Cradle of Forestry in America Interpretive Association, Alabama Department of Conservation and Natural Resources, local businesses, lake residents and visitors.
To learn more about or to volunteer with the Winston County ‘Renew Our Rivers’ campaign, please contact Allison Cochran at (205) 489-5111. To join the Winston County Smith Lake Advocacy, Inc and learn more about their projects in Winston County, please contact LaVerne Matheson at (256) 747-4422.
The Winston County Smith Lake Advocacy Group is a 501(c)(3) organization. Its mission is to preserve and protect the environmental quality of Lewis Smith Lake and its tributaries through education of the public and promotion and implementation of sound environmental practices.
William B. Bankhead National Forest is one of Alabama’s four national forests managed by the USDA Forest Service. Its mission is to sustain the health, diversity, and productivity of the Nation’s forests and grasslands to meet the needs of present and future generations. Motto: Caring for the land and serving people.
Posted by Allison C. at 8:20 AM 1 comments 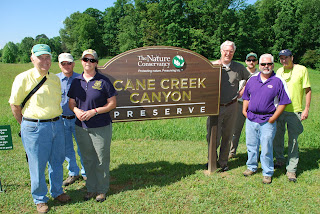 A group from the Winston County Natural Resources Council visited the Cane Creek Canyon Preserve in Colbert County on April 19, 2012.  Dr. Jim Lacefield and his family have acquired several tracts of land over the years in a special part of Colbert County.  Working with the Nature Conservancy, they have protected the property from future commercial use with conservation easements.  The Lacefields encourage the public to visit the property at no charge.  They do so with the belief that giving people a good place to enjoy nature will pay tremendous dividends in the future.

Dr. Lacefield hiked with our group on a portion of trails in the Preserve.  He led us to a population of French's Shootingstar-a very rare wildflower, pointed out several fossils and rock formations, and showed us a beautiful vista overlooking Cane Creek. 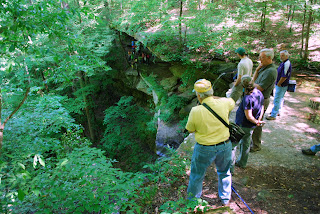 Several more photos from the visit are available at this link.

After the visit at the Preserve, we made a short trip over to Hawk Pride Mountain to Tom and Debbie Count's home where we were treated to grilled chicken breasts, baked beans, potato salad, fried apple pies, and chocolate pie.  Thanks to Jim and Faye Lacefield for hosting our hike, and to Tom and Debbie Counts for inviting us into their home for lunch.
Posted by Mike at 10:59 PM 0 comments

The April WCNRC meeting on Thursday, April 19th, will be a field trip to Cane Creek Preserve in Colbert County.  Tom Counts has made reservations with Jim Lacefield, the owner of the property.  Jim is a retired geology professor at the University of North Alabama, and the author of the book "Lost Worlds in Alabama Rocks."  Jim plans to meet with us and explain a little about the history of the Cane Creek Preserve.   We will have an optional hike on some of the preserve's trails and later have lunch at Tom and Debbie's home that is just minutes from Cane Creek Preserve.  Tom and Debbie will provide the food for our lunch, but participants may want to bring some water and snacks for the morning activities.  Thanks to Tom for making the arrangements for this trip.  We will meet at the U. S. Forest Service Office in Double Springs at 8:00 a.m.  We'll take as few vehicles as possible and depart shortly after 8 a.m.
Posted by Mike at 8:34 AM 0 comments