This imagery from Bing Maps makes me think that the loss of the hemlock trees in North Alabama will have a big impact on our forests. 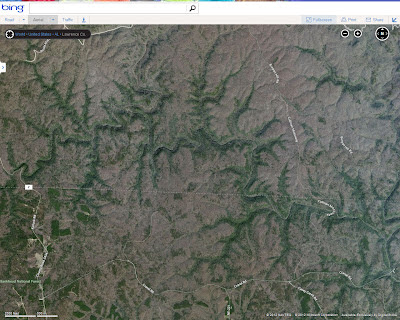 Above is an image of an area north of the Cranal Road in the Bankhead National Forest.  Clicking on the image should bring up a larger version for detailed viewing.  The photo was made in the winter, when the leaves are off the hardwoods.  The hardwood areas show as gray or brown.  The areas near the creeks are mostly green, and I believe that is due to the evergreen hemlock trees.  There are some green loblolly pine plantation blocks in the lower left of the photo, but they are pretty easy to tell apart from the the hemlock areas. 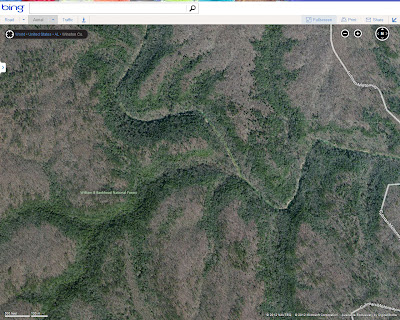 This is a closer view in the same area.  Here, Hemlock appears to be occupying about 50 percent of the forest.  Hemlocks are a major portion of some forests, and losing them will be a major impact.

For anyone interested in  being a part of a Citizens Group devoted to protecting the health and diversity of Clear Creek, you are invited to an organizational meeting.

A Rain Barrel Workshop will be held Tuesday, August 14,2012 from 9:00 a.m. - 12:00 noon in Haleyville at the Alabama Center for Advanced Woodworking Technology.  Please call Winston County Extension office at 205 489-5376 for registration information.  For further information see the complete flyer at: 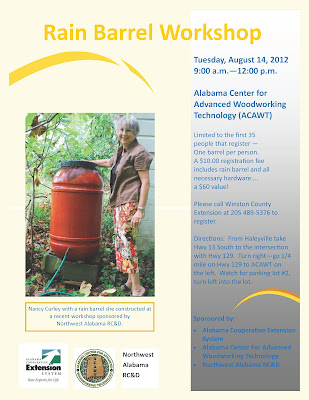 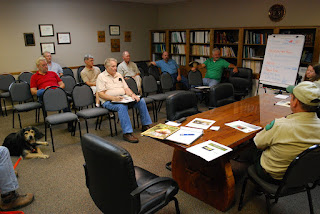 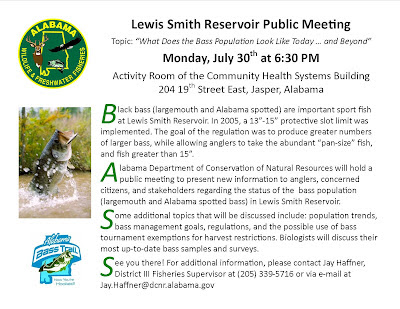 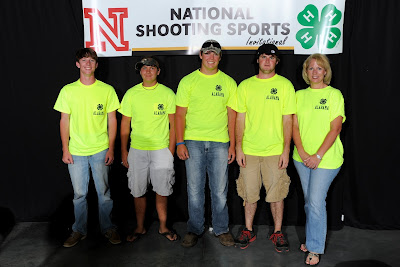 The Winston County 4-H Shotgun Team recently attended the National 4-H Shooting Sports Invitational held in Grand Island, Nebraska.  The team placed 13th nationwide, and competed against 25 other teams from all over the United States.  4-H’ers in this program strive to achieve the highest standards of safety, sportsmanship, and ethical behavior.  From left, Kurtis Robinson, Briley Chandler, Devin Wilkins, Caleb Stark, and the team’s coach, Karen Moore.  The Winston County Natural Resources Council helped sponsor the team's trip to Nebraska.
Posted by Mike at 8:27 AM 0 comments

The July meeting of the Winston County Natural Resources Council will be held at 9:00 a.m. on Thursday, July 19, 2012, at the U. S. Forest Service Office in Double Springs.
Posted by Mike at 8:20 AM 0 comments

The Alabama Department of Conservation & Natural Resources (ADCNR) will hold a public meeting on Monday, July 30 to discuss the status of bass populations in Smith Lake, bass management goals and regulations, and the possible use of tournament exemptions for harvest restrictions.  The meeting will be Monday, July 30 at 6:30 PM in Jasper at the Activity Room of the Community Health Systems Building.  The address is 204 19th Street East.  For directions, call the Walker County Chamber of Commerce at 205-384-4571.  For more information on the meeting, contact the ADCNR at 205-339-5716.
Posted by Allison C. at 2:31 PM 0 comments

Samford University recently sponsored a symposium titled “Preserving the Eastern Hemlock”.  If one had not heard of the new threat to the hemlocks in Alabama, this might seem like a strange topic.  But the hemlocks in Alabama face a very grave threat from the hemlock woolly adelgid.   The hemlock woolly adelgid, or HWA for short, has killed hundreds of thousands of trees in the Eastern U. S.  I’ve seen firsthand what it’s done to the hemlock trees in the Great Smoky Mountains National Park; almost all of them have been killed in many areas of the park.  HWA kills young and old trees alike.

The eastern hemlock is an important tree in Winston County.  It is abundant in the sheltered, cool coves and deep ravines that are common in all parts of the county.  The hemlock is considered a conifer, however, unlike other cone-bearing trees, it is very shade tolerant.  It can even grow in the shade of hardwoods, causing one forester at the symposium to say “Hemlock is so shade tolerant it can grow in the dark.”  The tree is well adapted to growing in sheltered ravines, and shady stream banks.  Deep canyons and cool conditions become rare in south Alabama; Jefferson County is the southernmost county that has native stands of hemlock trees.

The loss of the hemlock tree in the state would have a number of negative consequences.   Foresters note that there is no other conifer that can replace it in our forests.  No other conifer can tolerate the shade like a hemlock.  A number of species of birds and animals depend on the tree.  Hemlocks provide shade over many small streams, and when the trees die, water temperatures can rise as much as 4 degrees affecting many fish and aquatic insects.  The tree is an important lumber species in some parts of the U. S.  Finally, the appearance of the forests would change, since we would no longer have the same boughs of dark green in our winter forests.

The hemlock woolly adelgid has been in the United States since the 1950’s when it was introduced from Japan.  The insect has needle-like mouth parts which it uses to suck sap from the plant.  This feeding causes the tree to weaken and die in as little as three years.  Some studies suggest that the insect may even inject a toxin into the tree.  Some trees have survived 20 years after attack by HWA, but often entire stands of hemlocks are completely devastated 10 years after infestation.  The HWA has spread south from Virginia, down to Tennessee, and may soon enter Alabama.

The HWA is tiny, about 1/16” long and varies in color from dark reddish brown to purplish black in color.  As it matures it covers itself in wax filaments, or “wool”.  This wool is most conspicuous when the adult is mature and laying eggs.  The wool is white, and infested trees have white tufts at the base of the needles.  The adults lay eggs, which hatch into “crawlers” that disperse over the tree to find feeding sites at the base of the needles.  They have long feeding parts, much longer than their body, which they insert deep into the stems to feed on the tree’s stored reserves.  The crawlers and eggs are the most common way for HWA to disperse and spread into to new areas.  They can be spread by wind, birds, squirrels and other forest animals.  Long distance movement most often occurs by people transporting infested nursery stock.

The good news is that other states that have been infested with the HWA have developed treatments for the HWA that can be used on important trees.  While these treatments are not the complete answer, they do provide a way to save some trees.  Another strategy of using carefully screened predator beetles imported from Asia has proven to help with HWA, and this technique could benefit the entire population of hemlocks.

In the coming years, the HWA will probably spread to Alabama.  The hope is that the spread will be slow and the damage will be less severe than it has been in other areas.  If you would like more detailed information about the hemlock woolly adelgid, call us at (205) 489-5376.
Posted by Mike at 2:30 PM 0 comments