The quarterly meeting of the Bankhead Liaison Panel is scheduled for Thursday, May 5, 2011. The meeting will be held at the First National Bank in Double Springs and starts at 6 p.m. This meeting is open to the public. Please contact the District Ranger Station for more information at (205) 489-5111.
Posted by Allison C. at 2:04 PM 0 comments 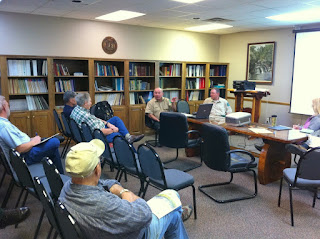 Johnna Franks reported that the balance in the treasury was $8,118.57.

Allen Varner with the Alabama Forestry Commission gave a program about the Landowner Conference that would include a Helene Mosley Award presentation.  He detailed the planning, implementation, evaluation and followup involved in a successful landowner program.  He said that the State Natural Resources Council would provide $3,000 for the program, and that there was an additional $650 dollars that had been applied for to support the program.  Registration for the program, marketing, organization, safety, logistics, food, and transportation were outlined, and later Council meetings will work out details of the landowner conference.  The site of the North Alabama Landowner Conference will be Bill and Jeanie Snoddy's TREASURE Forest, and it will be held on Friday, October 7, 2011.  Chris Wright is the chairman of the conference.

The monthly meeting of the Winston County Natural Resources Council will be held at 9:00 a.m. on Thursday, April 21st, 2011, at the
U. S. Forest Service Office in Double Springs.
Look forward to seeing you there.
Mike Henshaw
Secretary, WCNRC
http://wcnrc.blogspot.com/
Posted by Mike at 8:07 AM 0 comments 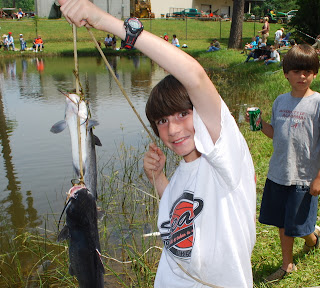 The Youth Fishing Derby will be held at the Black Warrior Work Center in the Bankhead National Forest on Saturday, June 11, 2011.  Youth ages 5 to 12 are invited to attend with a parent or guardian.  The pond will be stocked with hungry channel catfish, and there will be other youth oriented activities for the families.  Participants will need to bring their own bait and tackle for catfish.  This activity is part of the National Get Outdoors Day.  A printable flier is available at this link: 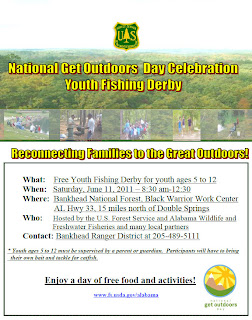 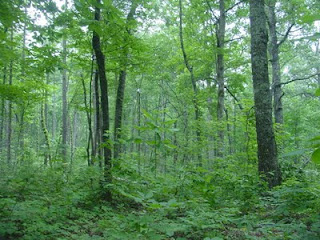 Research scientists and professors specializing in silviculture and forest management will be guest speakers at the workshop beginning at 9 a.m. A field tour of the Bankhead National Forest will immediately follow the presentations. A follow-up Question & Answer session will conclude the workshop by 5 p.m.

The workshop will begin promptly at 9 a.m. and participants are encouraged to arrive early to sign-in and receive printed materials. Participants are asked to dress appropriately to walk in the forest and to bring lunch and drinking water.

Interested participants are encouraged to register by calling the Bankhead Ranger District office at (205) 489-5111.
Posted by Allison C. at 9:22 AM 0 comments 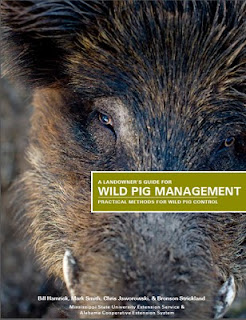 I recently received an e-mail from Extension Specialist Mark Smith about a new publication he co-authored on Wild Pig Management.  I have ordered some copies for our office.  Until then, you can access the publication by the on-line version below.  Here's the message from Mark:


Please see the link below to a joint ACES-MSU publication on Wild Pig Management.  This guide represents the combined knowledge and expertise from numerous wildlife researchers and managers from across the Southeast.  As wild pigs (i.e., feral hogs) are currently, and will continue to be, an issue throughout much of Alabama please distribute this comprehensive wild pig management guide to your clientele.
ANR-1397, "A Landowner's Guide for Wild Pig Management"
http://www.aces.edu/pubs/docs/A/ANR-1397/ANR-1397.pdf
Many thanks!
Mark
______________________
Mark D. Smith, Ph.D.
Assistant Professor/Extension Specialist

Update:
This will be an "web-only" publication for the time-being, due to cost.  I'll try to get some hard copies if they become available later.
Posted by Mike at 11:44 AM 0 comments

The Winston County 4-H Shooting Sports Club hosted a friendly competition with the Cullman County Shooting Sports Club on Saturday, April 2nd. The meet was held in Addison, at Tim Robinson's Farm. The competition requires that the youth complete several rounds of skeet and trap. The main purpose of this meet was to practice for the State 4-H Shotgun Competition that will be held in Childersburg on April 16th. Good luck to both these teams in Childersburg.
Posted by Mike at 8:47 AM 0 comments

Solve Your Fire Ant Problems with Help From the Experts

Got fire ants? Got questions on how to deal with them?  An upcoming webinar featuring scientists from several land-grant universities may be just what you need.  “Solve Your Fire Ant Problems with Help from the Experts” is slated for Thursday, April 21 from 11 to noon (Eastern Daylight Time).  The webinar will present the information that you need to know to control fire ants.  The webinar’s moderator Dr. Kathy Flanders of the Alabama Cooperative Extension System says it is actually easy to kill the fire ants that are bothering you once you understand how they live.
“Participants will learn how to apply the integrated pest management tactics that are as economical and environmentally friendly as possible,” says Flanders.
This interactive session will provide an opportunity to communicate directly with fire ant specialists and to ask questions related to specific problems you may be encountering.
Topics
•  How Can You Tell if You Have Fire Ants?
Dr. Jason Oliver, Tennessee State University
•  Understanding the Biology and Behavior of Fire Ants Makes it Easier to Control  Fire Ant
Dr. Timothy Davis, Clemson University
•  Managing Imported Fire Ants
Dr. Bastiaan Drees, Texas A&M University
•  Biological Control of Fire Ants
Dr. Fudd Graham, Auburn University
How to Participate
Log in as a guest at http://connect.extension.iastate.edu/fireant.
This webinar is sponsored by the Imported Fire Ant Community of Practice, which is part of eXtension.org. eXtension.org is the online information delivery program of the Cooperative Extension System. eXtension is an educational resource you can trust to take the best university-based research and turn it into hands-on, practical information you can use to solve today’s problems and develop skills to build a better future.
The Imported Fire Ant Community of Practice (see http://www.eXtension.org/fire+ants) involves fire ant research and Extension educators from all fire-ant-infested states. Through the power of the Iinternet and social networking efforts, this group provides practical solutions to imported fire ant problems representing the consensus of best management practices.
For more information about fire ants, visit www.extension.org/fire+ants.
Posted by Mike at 3:20 PM 0 comments 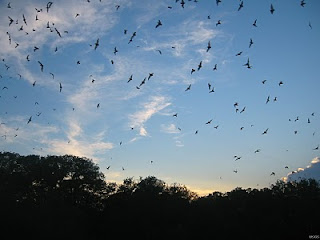 Bats worth billions to agriculture: pest-control services at risk as populations decline Pest-control services provided by insect-eating bats in the United States likely save the U.S. agricultural industry at least $3 billion a year, and yet insectivorous bats are among the most overlooked economically important, non-domesticated animals in North America, according to an analysis published in this week’s Science magazine Policy Forum. "People often ask why we should care about bats,” said Paul Cryan, a U.S. Geological Survey research scientist and one of the study’s authors. “This analysis suggests that bats are saving us big bucks by gobbling up insects that eat or damage our crops. It is obviously beneficial that insectivorous bats are patrolling the skies at night above our fields and forests — these bats deserve help." The value of the pest-control services to agriculture provided by bats in the U.S. alone range from a low of $3.7 billion to a high of $53 billion a year, estimated the study’s authors, scientists from the University of Pretoria (South Africa), USGS, University of Tennessee and Boston University. They also warned that noticeable economic losses to North American agriculture could occur in the next 4 to 5 years as a result of emerging threats to bat populations. “Bats eat tremendous quantities of flying pest insects, so the loss of bats is likely to have long-term effects on agricultural and ecological systems,” said Justin Boyles, a researcher with the University of Pretoria and the lead author of the study. “Consequently, not only is the conservation of bats important for the well-being of ecosystems, but it is also in the best interest of national and international economies.” A single little brown bat, which has a body no bigger than an adult’s thumb, can eat 4 to 8 grams (the weight of about a grape or two) of insects each night, the authors wrote. Although this may not sound like much, it adds up — the loss of the one million bats in the Northeast has probably resulted in between 660 and 1320 metric tons of insects no longer being eaten each year by bats in the region. “Additionally, because the agricultural value of bats in the Northeast is small compared with other parts of the country, such losses could be even more substantial in the extensive agricultural regions in the Midwest and the Great Plains where wind-energy development is booming and the fungus responsible for white-nose syndrome was recently detected,” said Tom Kunz, a professor of ecology at Boston University, another co-author. Although these estimates include the costs of pesticide applications that are not needed because of the pest-control services bats provide, Boyles and his colleagues said they did not account for the detrimental effects of pesticides on ecosystems nor the economic benefits of bats suppressing pest insects in forests, both of which may be considerable. Bat populations are at risk in some areas of the country as a result of the emerging disease of white-nose syndrome. The loss of bats to white-nose syndrome has largely occurred during the past 4 years, after the disease first appeared in upstate New York. Since then, the fungus thought to cause white-nose syndrome has spread southward and westward and has now been found in 16 states and 3 Canadian provinces. Bat declines in the Northeast, the most severely affected region in the U.S. thus far, have exceeded 70 percent. Populations of at least one species, the little brown bat, have declined so precipitously that scientists expect the species to disappear from the region within the next 20 years. Scientists are also concerned with the potential for losses of certain species of migratory bats at wind-energy facilities. By one estimate, published by Kunz and colleagues in 2007, about 33,000 to 111,000 bats will die each year by 2020 just in the mountainous region of the Mid-Atlantic Highlands from direct collisions with wind turbines as well as lung damage caused by pressure changes bats experience when flying near moving turbine blades. The issue raised by the authors is that the impacts on bat populations from white nose syndrome and wind turbines are just beginning to interact and might result in economic consequences. “We hope that our analysis gets people thinking more about the value of bats and why their conservation is important,” said Gary McCracken, a University of Tennessee professor and co-author of the analysis. “The bottom line is that the natural pest-control services provided by bats save farmers a lot of money.” The authors conclude that solutions to reduce threats to bat populations may be possible in the coming years, but that such work is most likely to be driven by public support that will require a wider awareness of the benefits of insectivorous bats. The article, “Economic importance of bats in agriculture,” appears in the April 1 edition of Science. Authors are J.G. Boyles, P. Cryan, G. McCracken and T. Kunz. A podcast with Paul Cryan is available on USGS.gov. USGS provides science for a changing world. Visit USGS.gov, follow us on Twitter @USGS, and our other social media channels.
Posted by Allison C. at 9:15 AM 0 comments