Twenty-nine individuals joined forces at Houston Recreation Area this week to continue the "Renew Our Rivers" effort to clean-up Alabama's waterways.  Staff and volunteers from Alabama Power Company, Bankhead National Forest, and Winston County Smith Lake Advocacy, Inc removed litter from sloughs on Smith Lake as part of Renew Our Rivers.  Three barges and a bass boat worked together to fill two construction dumpsters full of bottles, cans, noodles, rafts, fishing tackle, propane bottles, grills, and small chunks of foam floating in and along the shoreline.  Special recognition goes to Hyche LLC of Addison for donating the dumpsters and removing the litter. 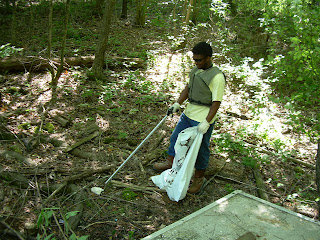 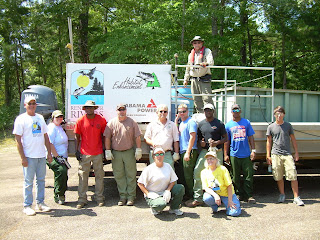 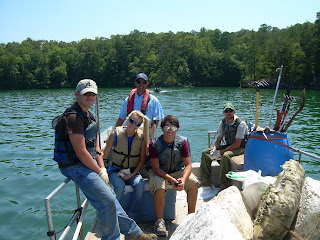 Thanks to Raymond Burnett for taking time to give us a tour of his Quail Farm near Addison.

Here's few photos from the tour.
Posted by Mike at 12:16 PM 0 comments 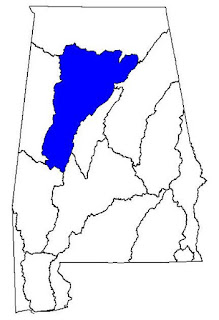 Registration fee is $20 per person to cover lunch costs.  On-line registration is available at http://www.cleanwaterpartnership.org/.  (See Upcoming Events on the right side of the web page.)  A draft agenda is attached for your consideration.
SPONSORED BY:
Westervelt Ecological Services LLC
If you have any questions or need additional information, please do not hesitate to contact Kellie Johnston, Black Warrior CWP Facilitator at (205) 623-0147 (email: warriorcwp@hotmail.com).
Posted by Allison C. at 2:42 PM 0 comments 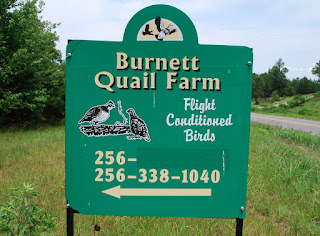 The Council's next meeting will be a field trip to Raymond Burnett's Quail Farm, on Thursday, June 21, near Addison.  James Burnett has worked to set up this field trip.  The informal tour will begin at 9:00 a.m at the farm.  Anyone wishing to carpool to the farm should meet at the U. S. Forest Service office at 8:00 a.m. and we will depart shortly after 8:00.
Posted by Mike at 10:48 AM 0 comments

Invasive Plant Control Program to be held in Decatur 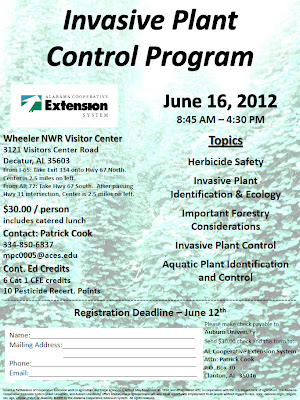 An Invasive Plant Control Program will be held on Saturday, June 16, at the Wheeler National Wildlife Visitor Center in Decatur.  The detailed program available here.

The Bankhead National Forest held the twentieth annual “Kids Fishing Derby” on Saturday, June 9 in celebration of National Get Outdoors Day, Alabama Free Fishing Day and National Fishing and Boating Week. The Forest Service, which hosts the yearly event to help interest young people in wildlife conservation and outdoor recreation, stocked a pond with about 450 pounds of catfish and invited area youngsters to try their luck.  A highlight of this year’s Derby was the National Wild Turkey Federation’s “Jakes Take Aim” Shooting Booth.  All children had the opportunity to practice their marksmanship and received a free membership to the NWTF’s Jakes club.

A total of 65 children (with accompanying adults) from surrounding counties came to the Black Warrior Work Center on the Bankhead National Forest to compete for trophies in three age categories. Contestants fished for approximately 1 ½ hours and the winners in each age group were decided by measuring the longest fish caught by each individual.

The largest fish overall, a 21” catfish, was caught by John Thomas Linley of Haleyville.

All first place winners and the winner of the largest fish overall received Lifetime Fishing Licenses which were donated by the Alabama Conservation Enforcement Officers Association. 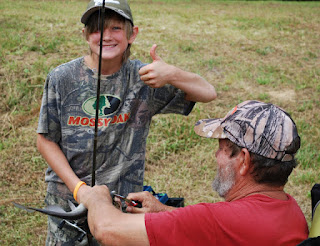 Click Here For More Fishing Derby Photos
The Derby concluded with drawing for door prizes, awarding of trophies to contest winners and a hotdog lunch.  This year’s event was sponsored by a grant to the Winston County Natural Resources Council from the Winston County Commission, a grant from the National Wild Turkey Federation, the Double Springs Lions Club, the Alabama Division of Wildlife and Freshwater Fisheries, Sipsey Strutters Moulton Chapter and Bankhead Beards and Spurs Winston County Chapter of the National Wild Turkey Federation, Alabama Conservation Enforcement Officers Association, and the Bankhead National Forest.

A big “THANK YOU” from Smokey Bear to everyone who continue to help make the Kid’s Fishing Derby a great success.
Posted by Allison C. at 7:48 AM 0 comments