The following items were discussed, including goals and programs for 2023.

AFC is holding a tree giveaway in Double Springs at the end of February or first of March at B&B Motors.

Learn and Burn for Winston County will take place at Matt Hannah's during the week of February 27th. Brad Nail is leading; registration page is live; Brad is reserving portable toilets and will coordinate a site visit.  Jason Berry with AFC is the POC working with Brad.

WCNRC will work with Cooperative Extension and Bankhead National Forest to host an non-native invasive plant workshop in Winston County this year.

Matt Hannah will take the lead on the 501C3 process for Council.  Annual tax filings will be required.

Mike Henshaw and Zack Brannon attended the Alabama Resources Advisory Council meeting.  A news release seeking proposals for RAC funds will come out with a deadline of 8/31.  Mike is serving his last, second, four-year term. Zack is starting his first four-year term.  there is funding in Title 2 currently from four fiscal years from Clay, Winston and Lawrence counties. Approximately $70,000 each was collected from Winston and Lawrence counites.  In Fiscal Year 23 there's been a new selection.  Clay, Lawrence and Winston counties did not opt in to the Title 2 funds.  It is unclear if those counties will receive funds from other titles or not.  Escambia and Talladega counties opted in Title 2 and will generate funds into the program.  An organization from any county can submit proposals, regardless of which counties opted in on Title 2.  The goal of RAC is to foster relationships.  Winston County Natural Resources Council will look for opportunities for RAC project proposals.

Mike Henshaw will join Maggie Johnson in a meeting at Mims Canoe launch on Thursday, 1/26.  They are meeting with Fred Couch from Alabama Scenic River Trails.

Alabama Forestry Commission is having a tree sale in Walker County on 3/3 near the farmer's market.

Bankhead received a NATR grant for trail signage through RC&D.

RC&D hosted an AgExpo at Bevill State College on 1/20 for 10th graders in Marion County. There are plans for a similar event for Winston County students.

Andy Scott reported on many projects going at Bankhead, including prescribed burning preparation and planning, hiring and vacancies, stewardship timber sales being available, cooperation with the I-22 Regional Commission and a Lawrence County Master Trails group, an upcoming hardwood planting project, and a DOE atmospheric research project installation in Lawrence County at the Black Warrior Work Center.

The next meeting is at the Learn and Burn at 688 Sipsey Pines Road in Arley. 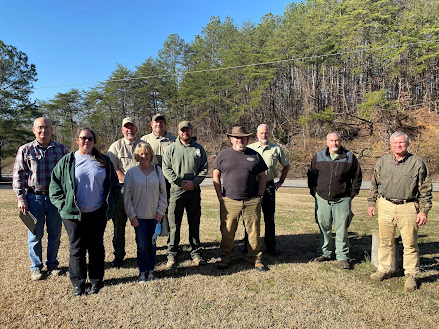 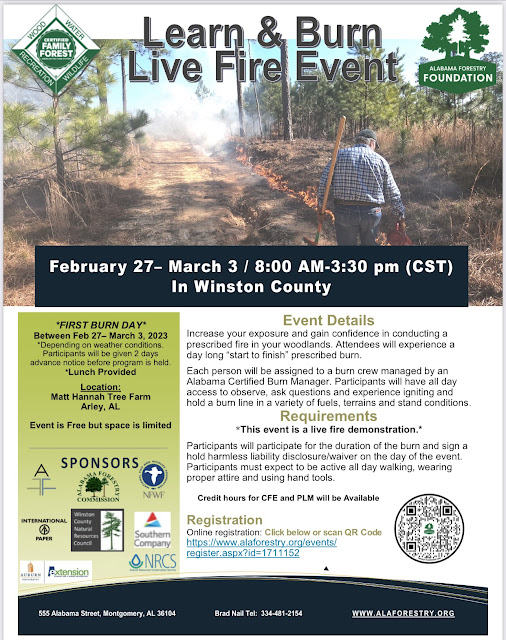 WCNRC scheduled to meet on 1/19 at 9:00 at Bankhead National Forest

The Winston County Natural Resources Council meets the third Thursday of every month. Our January meeting is planned for 1/19/2023 at 9:00 AM at the Bankhead National Forest.

The Council will not meet in December.  Our next meeting is 1/19/2023 at the Bankhead National Forest office in Double Springs. 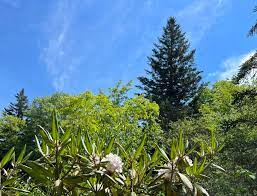 As the holiday season approaches, many households are busy setting up the Christmas tree in their homes. Since 1970, the U.S. Forest Service has provided a tree to the U.S. Capitol harvested from a different national forest each year. This tree has become known as “The People’s Tree”, to reflect the nickname of the U.S House of Representatives, “The People’s House.”

For the third time in history, the National Forests of North Carolina is honored to provide the 2022 U.S. Capitol Christmas Tree, having previously provided Fraser firs in 1974 and 1998.  The theme for this year’s tree is “From the Mountains to the Sea” to celebrate the diversity of public lands within the state of North Carolina. This year’s tree is a 78-foot red spruce from the Pisgah National Forest affectionately named Ruby in reference to the scientific name of red spruce, Picea rubens.

Red spruce is an iconic tree species for southern Appalachia. As part of the U.S. Capitol Christmas Tree program, the U.S. Forest Service partnered with the National Forest Foundation to raise funds for a new state-of-the-art nursery to grow red spruce seedlings for reforestation efforts. Among the seedlings to be grown at the nursery, managed by the Southern Highlands Reserve, will be those from Ruby’s seeds to live on in the next generation of red spruce.

The tree was harvested on November 2 and hit the road for a 14-day long tour from the Mountains to the Sea and up to Washington, DC, making 17 stops in communities along the way. At the U.S. Capitol, the tree was decorated with thousands of ornaments hand made by the people of North Carolina. After the official lighting ceremony on November 29, Ruby the Red Spruce will bring holiday cheer and represent the State of North Carolina to those who visit her in Washington, DC. When the holidays are over, wood from Ruby will be returned to western North Carolina and used to make guitars and banjos by local musical instrument makers.

Read more in our news releases below:

The WCNRC will meet on Thursday, November 17, 2022 at 9 AM at the Bankhead National Forest office in Double Springs.  The address is 1070 Hwy 33 North.

There will not be a December meeting.

The Marion County Forestry Planning Committee and Winston County Natural Resources Council held a landowner tour and regional forestry field day at the Bill and Ann Self Farm near Natural Bridge on October 21, 2022.  About 65 people attended, including Alabama landowners, foresters, loggers and natural resources professionals representing many agencies and organizations. 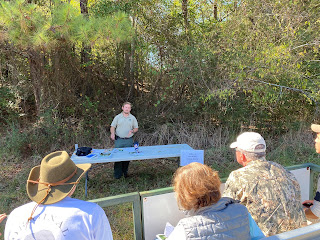 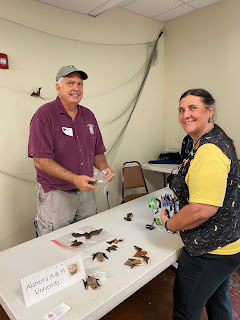 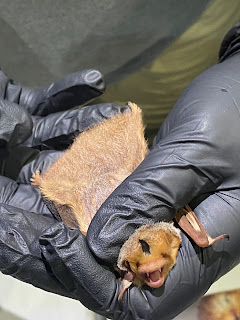 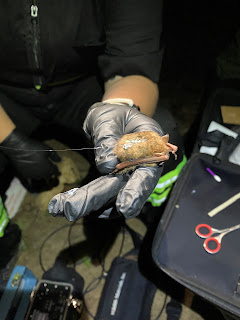 Biologists recently banded and radio-tagged bats that are an important part of our night-time wildlife. During the first week of August 2022, the Alabama Bat Working Group hosted the Southeastern Bat Diversity Network’s Bat Blitz (SBDN) on the Bankhead National Forest in Alabama.  A Bat Blitz is a coordinated, intensive survey designed to sample the bat community in an extensive area. These events generally involve a substantial, voluntary contribution of time and materials from bat experts.  Bat biologists from across the southeast, and even from another country this year, descended on Bankhead National Forest to sample bats over roads and streams in the Forest using mist nets and at caves using harp traps.  An educational event was hosted to raise awareness about the value of bats and their role in our environment.  For instance, did you know that bats consume insects that would have caused billions of dollars in agricultural damage in the USA every year? Bats also prey on insects that are vectors of diseases to other animals and humans.

The goal of the 2022 Alabama Bat Blitz was to conduct a comprehensive survey of the bat community of Bankhead National Forest and surrounding environments to continue learning where bats occur on Bankhead National Forest, their habitat use and about trends in presence.  SBDN held its Bat Blitz at Bankhead in 2008, prior to the advent of White-Nose Syndrome (WNS) in Alabama, a disease that has devastated bat populations in the United States. WNS was first documented at Bankhead in 2014. The 2022 Alabama Bat Blitz replicated the 2008 Blitz and will directly compare the composition of the bat community at Bankhead 6 years before and 8 years after the arrival of WNS.  Importantly, the intensive survey, along with other ancillary data collected in the State, revealed the impact of the fatal WNS bat disease on once prevalent federally listed Indiana bats (Myotis sodalis) and Northern long-eared bats (Myotis septentrionalis), in a critical forest habitat like the Bankhead NF.  The partners also documented feeding activity and roosting sites of bat species of concern using radio-tracking. Rare bats and species in decline from the WNS were tagged with light-weight (0.25grams) radio transmitter that emits a radio signal to portable radio receivers for radio tracking the bats’ locations night and day.   This information will guide the future management of Bankhead National Forest by the US Forest Service (USFS).

Ten teams of biologists surveyed bats over a three-night period.  The biologists netted or trapped 29 sites across Winston and Lawrence counties, including both upland and riparian sites, pine, hardwood and mixed pine-hardwood forests, and caves.   Bats were captured with a fine-mesh mist net and were then quickly removed by a trained biologist. They were weighed, measured, identified and health status was quickly assessed. Most bats were released within a few minutes where they were captured. The biologists captured 189 bats of five species, including red bat, big brown bat, tricolored bat, evening bat, and seminole bat.  No federally listed bats, Indiana, Gray, or Northern long-eared bats were captured this year. The biologists attached radio transmitters to four rare tricolored bats in attempts to conduct a radio telemetry project to learn more about their  use of the forest.  A small team of biologists attempted to radio-track the four bats from the ground and the air for the life of the radio transmitters, a period of about 12 days.  One radio-tagged tricolored bat was located over eight miles from its initial capture point.

In comparison, in 2008 before the arrival of white-nose syndrome, at the same sites and with less netting effort, biologists at the Bat Blitz captured 385 bats of seven species including big brown bat, red bat, gray bat, Northern long-eared bat, Indiana bat, evening bat and tricolored bat. The impact of WNS on the northern long-eared bat was especially evident when 101 were captured in 2008, but none were captured in 2022. The declines in other federally-listed bat species that hibernate in northern Alabama caves demonstrates the need to protect these species and their critical habitats.